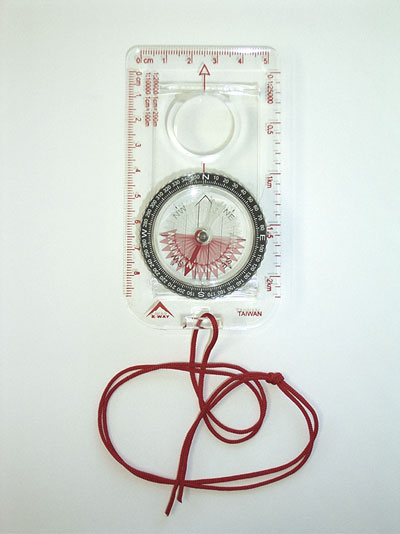 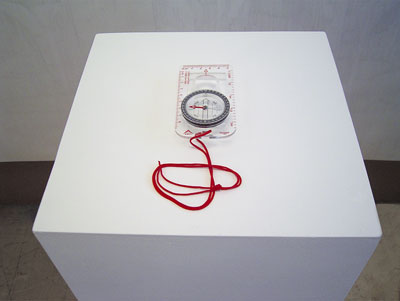 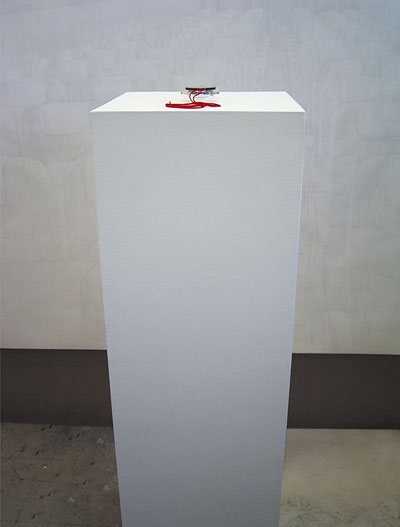 This piece consists of a white plinth with an ordinary field compass placed on it. Hidden within the plinth are two electromagnets connected via a relay switch which rapidly switches current between the two magnets so as to set up a fluctuating magnetic field. This fluctuating field causes the compass needle to swing wildly and erratically from side to side – in seeming violation of the its principle of alignment with the earth's magnetic field. The compass itself is made entirely from clear perspex and it is thus clear that no internal mechanism within the compass is causing the fluctuations. The electromagnets are powered by a battery concealed within the plinth so that no external clue is available to alert the viewer as to the mechanism. To all intents and purposes the compass will appear to be wildly fluctuating of its own accord. By deflecting responsibility for this movement onto the viewer – via the title – I hope to make the viewer/participant complicit in this apparent defiance of a physical law.

The "Arrow of Time" is a set of scientific proofs that aim to establish that time flows in one direction only. Technically put, if a hypothetical arrow points toward more of the random elements in the universe then the arrow is pointing towards the future – if the random element deceases then it is pointing towards the past. From this is derived the Second Law of Thermodynamics, the universal principle of decay in which more order becomes less order, ie total entropy increases. This one-way property of time is vividly recognised by our consciousness and equally insisted upon by our reasoning faculties, for we understand that a reversal of time's arrow would render the external world nonsensical. This is because time is not symmetrical – if it was events would appear equally 'realistic' or plausible whether played forward or backward.