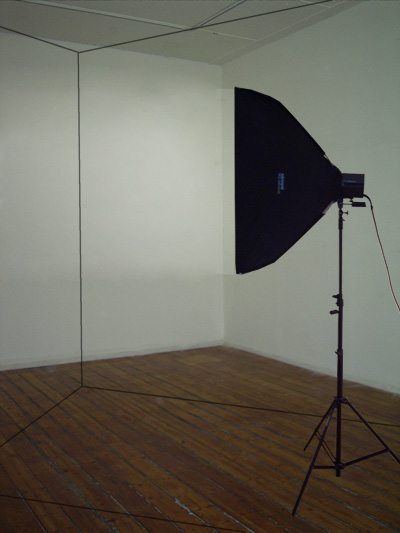 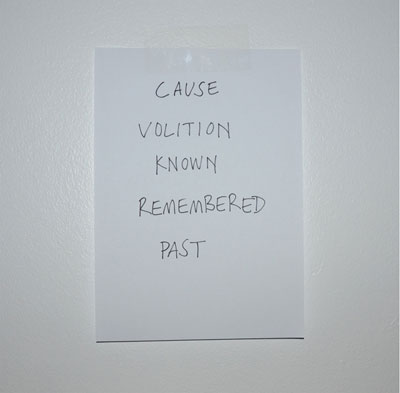 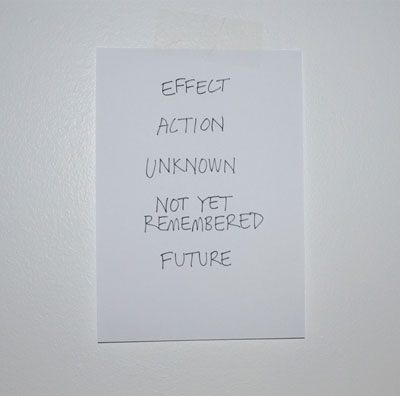 room for one direction

The installation 'Room for One Direction' consists of a clearly demarcated area in which as many as possible of its physical attributes – both visible and invisible – are constrained into a single plane. Using the earth's magnetic field as the given 'direction', a bearing on north is taken in the gallery space and a new, north-facing room inscribed within the existing room. This is done with line and will appear anamorphic within the space unless the viewer stands in a particular spot – a spot in which he too will be aligned in the direction of the room. A compass placed in the centre of this new room confirms the orientation of the space. All natural light is excluded and north-facing halogen lamps covered with linear polarizing sheets polarize all visible light (and the high infra-red range emitted by the lamps) in the space into a single plane.

The “Arrow of Time” is a set of scientific proofs that aim to establish that time flows in one direction only. Technically put, if a hypothetical arrow points toward more of the random elements in the universe then the arrow is pointing towards the future – if the random element deceases then it is pointing towards the past. From this is derived the Second Law of Thermodynamics, the universal principle of decay in which more order becomes less order, ie total entropy increases. This one-way property of time is vividly recognised by our consciousness and equally insisted upon by our reasoning faculties, for we understand that a reversal of time's arrow would render the external world nonsensical. This is because time is not symmetrical – if it was events would appear equally 'realistic' or plausible whether played forward or backward.

There are a number of these proofs, but the two which are referenced within the Room for One Direction are the 'Causal arrow of Time' and the 'Perceptual arrow of Time'. The causal arrow derives from the logical and necessary statement that cause precedes effect; that the correlations we observe between cause and effect could only be created if we were moving forward in time. The perceptual arrow points to the cataloguing of ever increasing items of memory; in other words, the past consists of what we remember, the future consists of those events that cannot yet be remembered. The perceptual arrow is the sense of a continuous movement from the known (the past) to the unknown (the future). Even the anticipation of the unknown (the psychological future) is a part of memory – it only seems to be projected ahead of us. Volition leads to action. The space of the room will provide the framework for the physical placing of past and future, and hence, of one direction.