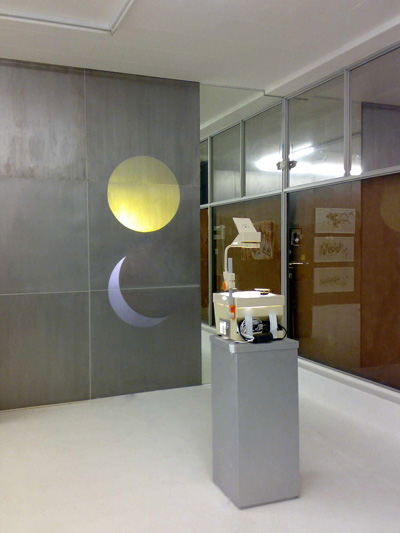 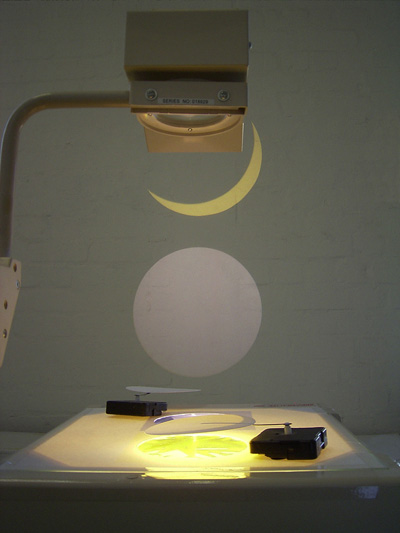 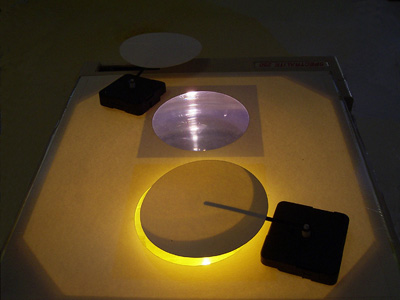 This piece consists of an overhead projector and two clock mechanisms. The projector face is masked using paper and coloured cellophane so that it projects two spheres - one yellow, one blue - on the gallery wall. Two circles of paper are attached to the hour hand of the clock mechanisms and the devices placed on the projector so as to cause each projected sphere to eclipse once every hour.

Aletheia is a pre-Socratic concept of truth in which the truth of a thing or proposition lies not in its coherence with, or correspondence to, a wider set of accepted propositions (a definition of truth more familiar to us), but in its disclosedness; its state of not being hidden, but of being evident.

This piece, in its recreation of a solar and lunar eclipse, is not a critique of the 'unnatural', but an attempt to create a valid event with reference to nature. Thus the legibility of the mechanism by which the event is produced is paramount - any attempt to disguise the means by which the eclipses are produced would have reduced them to mere effect - an impoverished imitation of nature. If the viewer can immediately apprehend the means, then they are free to appreciate the projection for what it is - a formal arrangement of shifting shapes and colour, which whilst referencing something else, asserts itself as a visual event in its own right.